To answer the question; What is a perpetual calendar? We have to go back in time.

The birth of Thomas Mudge

It all begins when in September 1715 the considered greatest watchmaker of all time named Thomas Mudge was born. He grew up in the ancient city of Exeter, Devon, England. Father Zachariah Mudge noticed his sons exceptional talent in clockmaking very early on. He introduced his son to clock, watch and instrument maker George Graham in the Clockmakers’ Company, London. Graham discovered the talent of the then 15-year-old Mudge and became his mentor.

Mudge excelled very quickly in Graham’s workshop. Mudge took a leading position in the workshop after he was admitted to the Freeman of the Clockmakers’ Company in 1738. Among its Freemen have been some of the most famous and respected clock and watch makers the world has ever known. Membership brings great prestige to those interested in or employed in horology. On the other hand, it brings also a number of responsibilities and obligations, for example supporting the Company financially.

Now that Mudge was a freeman of the Clockmasters’ Company, the word spread quickly over London and Mudge watchmaking skills got picked up everywhere. Important London retailers began to employ Mudge for multiple jobs. Eminent watchmaker John Ellicott appointed Mudge to make an equation complicated watch, which John Ellicott couldn’t make himself because of a lot difficulties with its construction.

Of course Mudge finished the job and got discovered by the one and only King Ferdinand VI of Spain to be the actual maker of the watch. After the discovery by the king, Mudge supplied more watches to Ferdinand VI. Mudge made at least five watches for King Ferdinand VI, including a watch that repeated the minutes as well as the quarters and hours.

In 1748 Mudge opened his own business a few doors away in 151 Fleet Street named “Dial and One Crown”. Mudge’s reputation was on the rise and made name for himself with a permanent commission from King Ferdinand VI. His reputation as a watch supplier soon brought him to the notice of King George III of the United Kingdom.

At the death of Mudge’s mentor George Graham’s in 1751, the newspaper Daily Advertiser for November 18 wrote the following:

‘Thomas Mudge, watchmaker, apprentice to the late Mr Graham, carries on the business in the same manner Mr Graham did, at the sign of the “Dial and One Crown” opposite the “Bolt and Turn” in Fleet Street.’

The invention of the Perpetual Calendar

A perpetual calendar watch is one of the most sophisticated watches the world knows. The function doesn’t just serve the practical purpose of showcasing the day, date, month and moonphase without adjustment. It serves to elevate the craft of watchmaking itself.

It would take almost two full centuries for the technology to make its way to wrists. Patek Philippe first made a commercial perpetual calendar wristwatch in 1925.

Mudge invented the lever escapement in 1755. He then introduced it on a smaller scale in a watch that he made in 1770 for King George III. Mudge impressed King George III with his new masterpiece. (see picture below) King George III presented his new pocket watch to his wife Queen Charlotte. To this day the pocket watch still remains in the Royal Collection at Windsor Castle. The Royal Family appointed Mudge as an official Royal Watchmaker in 1776. He served them on a salary of £150 a year, a post which he occupied for the remainder of his life.

Interested in a Perpetual Calendar Watch?
CHECK THEM OUT 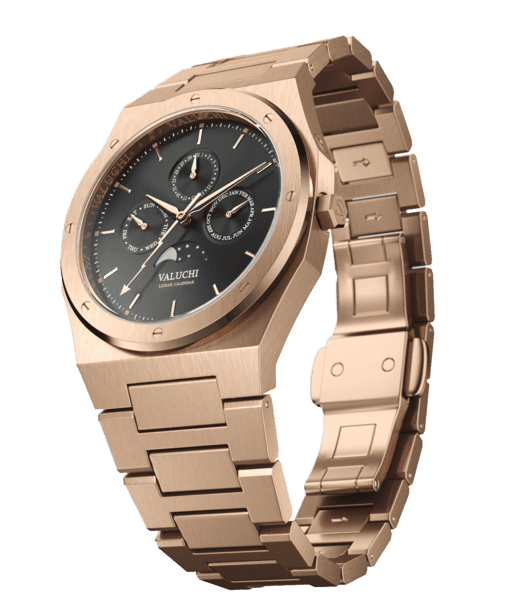 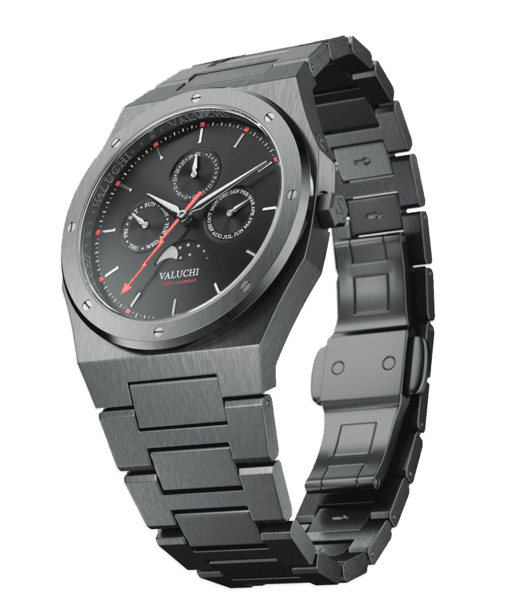